Today, in St. Paul, a cyclist was killed when hit by a school bus. The accident happened at Snelling and Summit, which is a complex intersection involving service roads. You can get a sense of it from this Google map:

The cyclist was headed westbound, straight, per witnesses. The bus was turning left. The students on the busÂ saw the cyclist lying bleeding in the street near the bus’ front bumper.

Naturally, during the briefing with police at the site, two questions were asked:

Because we are talking about a cyclist going straight and a left-turning bus, if the cyclist ran the red, so did the bus. There is no left turn signal. Instead of asking “Did the cyclist run the red light?” someone might as well ask “Do you believe the cyclist was actively suicidal?”

Per pictures in articles covering the crash, the cyclist was hit by a flat-front bus. 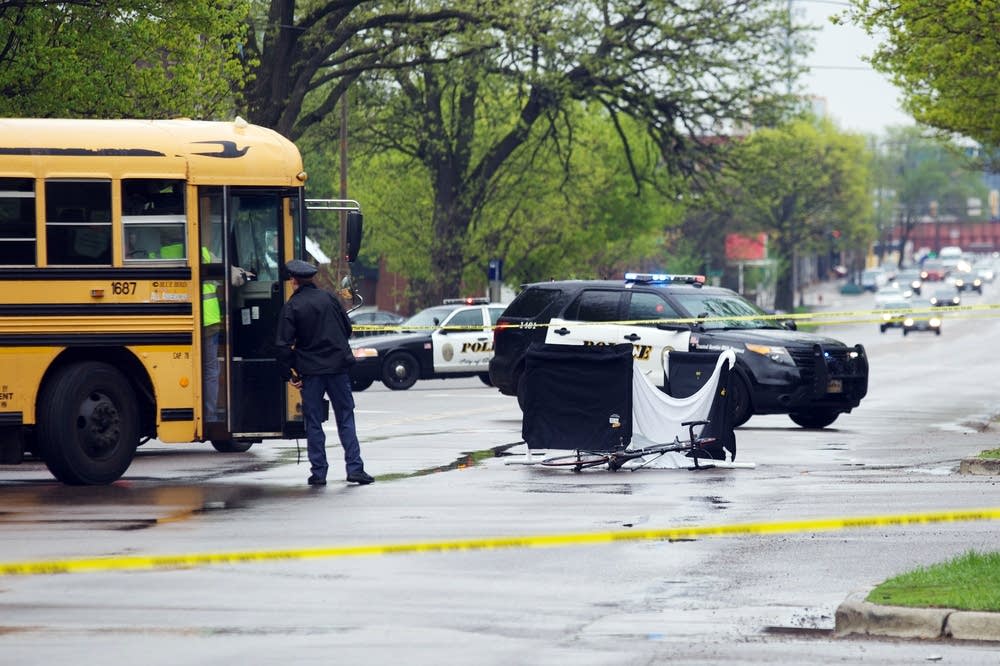 A flat-front bus is also known as a Type D bus. It typically is over 10,000 pounds gross weight, and generally between 10 and 11 feet in height. The picture above gives a sense of scale compared to the nearby police SUV. The bus driver will be looking over most vehicles in traffic.

If you are hit by a flat-front bus, accelerating through a left turn, a helmet is the least of your worries as a cyclist. You are not going to die from the head wound. You are going to die of blunt force and internal injuries to your torso. It doesn’t take experience in trauma, in collision science, or even a passing grade in high school physics to realize this. A recent study by theÂ Insurance Institute for Highway Safety found that SUVs, withÂ high-riding style, flat front ends, and higher total horsepower are likely to strike pedestrians higher on victimsâ€™ bodies â€” at the chest rather than in the legs â€” and strike with more force. And they’re smaller than these buses!

So what are the right questions to ask? Well, here are some ideas:

There is plenty of history in this intersection, including a 2009 deathÂ and a 2014 crash leading to long-term rehab. Plenty of questions can be asked from this history.Â The articles I have read so far all neglect to even mention the past.

If “severe head trauma” is indicated, sure, ask if the other injuries were survivable had there been a helmet. But a helmet doesn’t protect your spine, torso, ribcage or any internal organ except sorta your brain against 10,000+ pounds of flat-front, left-turning bus. And a helmet is not a virtue signal. “He was wearing a helmet” is not shorthand for “did not deserve to die,” and “was not wearing a helmet” is not a flag for “that awful bicyclist the commenters in the Star-Tribune told you about.”

I like bike helmets. They are often useful. But they shouldn’t be in the first 25 concerns anyone has about this particular collision. Stop wasting media briefing time on the helmet question. Stop pretending that helmets save lives in these situations, because they don’t. And let’s figure out how to stop these deaths from happening, again and again.

If you enjoyed this post, please consider leaving a comment or subscribing to the feed to have future articles delivered to your feed reader.